Minutes of Meeting Between SBI Management and Pensioners, FSBIPA

1 month ago 22
SUMMARY OF THE VIDEO CONFERENCE MEETING HELD ON 06th JANUARY 2021 BETWEEN THE CHAIRMAN, SBI AND REPRESENTATIVES OF THE FSBIPA
______________
PRESENT From SBI:
1. Sri Dinesh Kumar Khara - Chairman
2. Sri Rana Ashutosh Kumar Singh - DMD & CDO
From Federation of SBI Pensioners:
1. G.K.Gandhi - (could not  join due to technical problem)
2. Shantharaju-Vice President
3  S.B.Gokhale-Vice President
4. P.K.Pathak -Vice President
5. Upendra Kumar Dash-Vice President
6. A.Ramesh Babu-General Secretary
7. Deepak Basu - Secretary
8. Chhabria Rajkumar – General Secretary (Mumbai Metro)
The Meeting commenced with the Chairman welcoming and extending his New Year Greetings to the representatives of FSBIPA.  Shri Ramesh Babu, General Secretary, thanked the Chairman for convening the Meeting with the representatives of the Federation so quickly and early in the New Year. Without losing much time on the formalities, Shri Ramesh Babu brought to the attention of the Chairman the following issues of Pensioners that remained pending for several years:
Also Read - PNB Has Reduced the Annual Entertainment by 20% at All Levels
a) Payment of Pension to all retirees @ 50% of last drawn Pay.
b) Rectification of anomalies in the fixation of the Pension of all who retired between 1987 and 2002.
c) Reckoning PQP and FPP for purposes of fixation of pension of 7th Bipartite Retirees.
d) Payment of DA to the pre-2002 Retirees at 100% neutralization.
e) Correction in Commutation formula in SBI to be carried out
f) Updation of Pension of all Retirees
g) Payment of Family Pension @ 30% without limit
Shri Ramesh Babu  stressed the fact that the affected Pensioners are all above 70 years and have set huge hopes on the Chairman for resolving the long outstanding issues including improvement and updation of Pension. He also mentioned the plight of Pensioners retired in the Top Executive Grades drawing very low Pension compared to those retired in the junior grades, leading to depression.
He requested the Chairman to settle the Bank-specific issues of Pensioners even while pursuing the other industry level issues with the government. 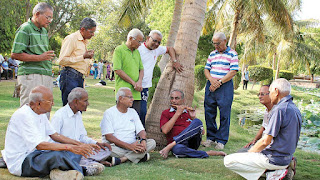 CHAIRMAN'S RESPONSE :
The Chairman while wishing everyone a happy, healthy and successful year advised to mask the year of Mask. He responded with sympathy to the issues raised by the Federation. He said that he knew that many of the issues have been pending for the last 20 to 25 years. He assured that those issues are engaging the Management's attention. After assuming office as Chairman of the Bank, he has taken up the issues with the Government. There are, however, industry level issues that need to be worked with the IBA and even those issues are being pursued with the Government, he said.
"We are putting across our view point to the Government of India with a view to get (things) on principles of equity. In terms of effort, there is no let-up; we will certainly intensity our efforts going forward. Whatever is required to be done from the Bank's side, we are there to support the cause of the Pensioners" he said. The Chairman emphasized that everyone in service today would someday retire. With this in view, he would himself really look at ways to survive post retirement.
He concluded that the Bank would intensify their efforts to highlight the Pensioners' issues in all meetings with the Government,  hoping for a meaningful outcome. He hastened to add that the outcome of the efforts is a function of the decision makers' response in a wait and watch situation. He then advised the CDO to place his remarks.
The CDO assured the Federation that, as head of HR, he is committed to do for Pensioners all those things which are in the Bank's control. He added that the Chairman is keen on extending help to pensioners on whatever is within the control of the Bank and his department is working towards improving the life of pensioners.